In addition to a more traditional lodge experience (but perhaps still incomparable, as it’s deluxe in every way despite being exceptionally remote), Fishhound Expeditions offers something fairly unique: multi-day, fly-in, float expeditions into wild Alaska.

Alaska and incredible fishing are synonymous! Our huge state has more rivers and lakes than, well, almost anywhere. But, with the size of our state and its inherent rugged nature we have fewer roads than the tiniest states in the union. So, what does this mean for anglers wishing to fulfill their dreams of wild fish and vast expanses of wilderness?

This means that in addition to the conventional methods used to access rivers such as driving, hiking, and floating one may need to enlist a more unique means…a helicopter!

Helicopters provide some of the greatest access to Alaska’s countless rivers and lakes, and unlike conventional fixed wing aircraft which are dependent on an airstrip; helicopters can land nearly anywhere, from tiny gravel bars to remote alpine tundra.

Air travel has long and storied history in Alaska. And it’s true: nearly everyone here is a pilot, has flown, or spent many hours in small aircraft. In fact, air travel is the only way a lot of smaller “bush” communities are accessed. Fixed wing aircraft is a great way to access prime fishing locations that have a great history of producing wild fish. However, there are many, many smaller systems and systems that do not yet have a great history and have “flown” under the radar because there aren’t any landing strips or lakes where planes can land. This is where helicopters shine! These amazing aircraft are safe, stable, and meticulously looked after by the pilots, mechanics, and the FAA. In addition to being a super effective means of gaining access to hard-to-reach areas, heli’s are also generally more affordable to anglers than their fixed wing counterparts. These factors are why heli-fishing is opening up new frontiers in the last frontier.

For most heli-fishing in the state anglers will travel to our main hub which is Anchorage. From there they will travel either by air or road to a smaller city or town. Then from that point they will hop in the “bird” and be flown to a fishing paradise. There are a variety of heli-fishing options, from single-day fly-out trips, multi-day remote float trips, to high-end flyout and back everyday lodge trips. Basically, there is a heli option for every budget from super lavish to true dirtbag fish bum!

No matter the budget, anglers will not be disappointed in the product they receive. Fly-in fishing in Alaska is phenomenal, however heli-fishing takes it to a whole new level and the variety of options make it accessible to most anglers visiting Alaska. If you’re on a budget or short on time you can choose to do a single day heli-fishing fly out. For overnight heli-fishing trips you can vary the length of your trip to suit your budget…and for those with no budget, there are high-end lodges where the lodges have their own helicopters to fly guests out to remote waters daily.

I have been fortunate enough to heli-fish and guide heli-fishing throughout Alaska and Kamchatka. The experiences, memories, and stories it has given me has shaped the angler I have become. The access, affordability, and ease these amazing machines offers anglers is something that has been greatly overlooked in our sport/lifestyle. I had been on many fixed-wing fly out trips before I started heli-fishing and was used to the incredible access a plane offered. But with planes, the pilot, landing strips, or lakes dictate where you go.

The first time I was scouting a new river with one of my favorite heli pilots, we were flying right over the river through an incredible broad canyon, and I could see the spawning salmon and splashes on the surface as fish moved through the gin-clear water. I was used to being told where we would land and was almost expecting this when the pilot looked at me and she asked “where do you want to land?” I was speechless!

I asked if we could fly up a few more bends and she agreed, and there it was: a tiny little gravel bar where the river above braided into many tiny little braids full of fish! The gravel bar was probably only 30 or so feet in circumference. She sat the helicopter down so perfectly and smoothly I barely knew we were back on the earth! I had never experienced such freedom or choice in exploring wild places and chasing fish! I got all my gear unloaded and the helicopter flew off.

Immediately I was greeted by the sounds of the river, and of complete silence. The only tracks in the sand were of bear and birds. Looking over the water I could see countless Silver Salmon and Chum Salmon and moving in between them were Trophy Rainbow Trout, Dolly Varden, and Arctic Grayling. Few if any people had ever been this far up in the system and if they had they took such care to make sure their presence was not left behind. This is the type of experience heli-fishing offers anglers in Alaska!

Adam Cuthriel is the owner and operator of FishHound Expeditions, located in the town of Willow, Alaska just an hour north of Anchorage…FishHound Expeditions offers heli-fishing day trips as well as 5-10 day fully-guided remote heli-fishing float fishing adventure to Western Alaska for those looking for the ultimate Alaska fishing adventure. There are a variety of options for heli-fishing in Alaska, but what separates FishHound Expeditions is their passion, knowledge, amenities, gear, and continuing exploration with these amazing aircraft. Their gear is handmade or purchased specifically to fit in helicopters, which allows them to bring incredible freshly prepared food, great comfortable camp scenes with cots & pads, separate sleeping tents for clients, and specific cooking/eating shelters, and lots of room for beer/wine.

The Top 10 Best Fishing Lodges in BC

Canada’s British Columbia (BC) is world-renowned for freshwater and saltwater fishing. Salmon fishing in BC is productive all year round. Fly-fishing the many rivers and

There is nothing that will stop success when you surround yourself will people who are knowledgeable, on the same page, and have the desire to create world class fishing experiences for people. It’s people who find absolute satisfaction in helping people to fulfill their expectations and better yet push it up to the next level. 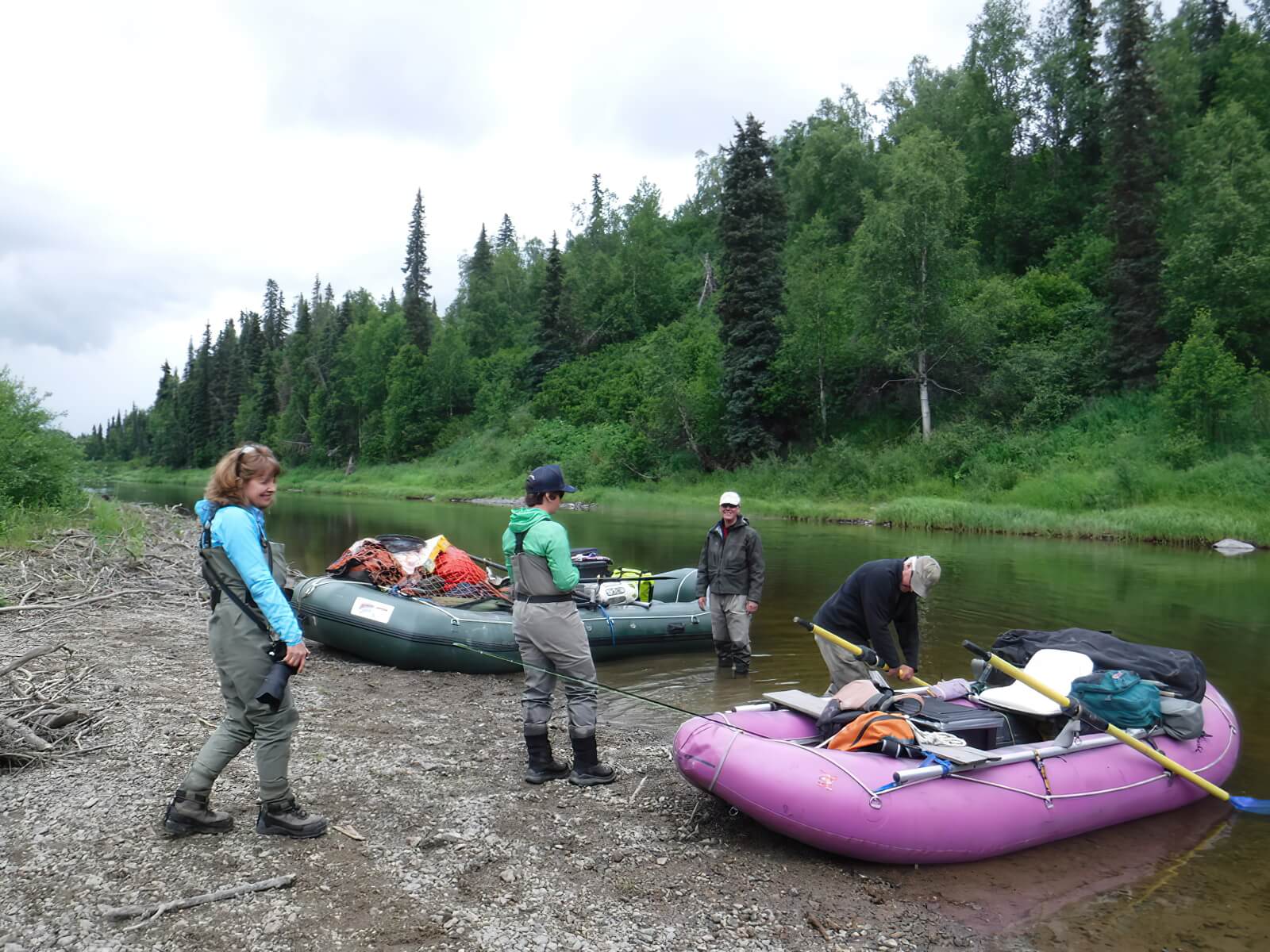 All fishing in Alaska is amazing! Part of the lure of Alaska is the remote wilderness it offers. While fishlodges.com highlights many Alaska lodges which are great for most people and come with obvious benefits, some anglers may want to consider doing a multiple day float trip. Anglers that pursue these unique trips will be rewarded with many more remote settings that are only accessible by air and then by boat.

Never miss an blog post. Post questions to lodges or past guests. if you have any interest in fishing lodges and resorts, this is a vibrant community for you.

The Top 10 Best Fishing Lodges in BC

What do fishing vacations in Alaska cost? 6 price averages to help you plan

Sportfishing in the Kenai Peninsula, Alaska

Discover world-class freshwater and saltwater fishing in Alaska amongst majestic mountains, glaciers and an abundance of wildlife on the Kenai Peninsula. This region’s dramatic scenery and landscape offers a wealth of activities for all lovers of the outdoors, especially for those who love to fish.

Alaska offers some of the most spectacular freshwater, saltwater, and fly-fishing in the world. With nearly 34,000 miles of ocean shoreline, over 3 million lakes, 12,000 rivers and thousands more fish-filled streams, the challenge isn’t catching fish, but deciding where and what to catch.

This message is only visible to site admins
Problem displaying Facebook posts. Backup cache in use.

Error: An access token is required to request this resource.
Type: OAuthException

STEELHEAD SUNDAY: This beauty caught on the Skeena River with Westcoast Fishing Adventures. They still have some great dates available this fall. fishlodges.com/lodge/westcoast-fishing-adventures/ ... See MoreSee Less

Don't let this happen to you! ... See MoreSee Less

Today we added another great Manitoba fishing lodge: An extension of Cobham River Lodge, this fly-in outpost on Hidden Lake offers you a trophy fishing experience in the secluded wilderness of Manitoba on your very own private lake. Here you can chase trophy Northern Pike and trophy Walleye all week long without any interruptions and not another fishing boat on the lake other than your groups. You will feel “Hidden” from the rest of the world as you get to concentrate on the important stuff, relaxation and fishing. fishlodges.com/lodge/hidden-lake-outpost/ ... See MoreSee Less

We're thrilled to add another truly world-class, truly Canadian all-inclusive fishing vacation destination to fishlodges.com! Cobham River Lodge in eastern Manitoba boasts hundreds of miles of shoreline packed with Walleye and Northern Pike. It's the only lodge for hundreds of water miles, so the only anglers to fish these waters are the guests of the lodge. Not uncommon for 2 fishermen to catch and release over 100 fish per day! Despite its remote location, the meals are high-end—exquisite enough to satisfy the most discerning palate, yet fulfilling enough to be considered good old fashioned comfort food. fishlodges.com/lodge/cobham-river-lodge/ ... See MoreSee Less

Tuesday trout: This rainbow from Quesnel Lake, in Southern Interior BC. The trout in this watershed are among the largest of their species in the world. fishlodges.com/lodge/northern-lights-lodge/ ... See MoreSee Less

Post your own request for a fishing lodge vacation in the northwest: fishlodges.com/request-trip/ ... See MoreSee Less

Group of 3 looking for a summer 2021 Southeast Alaska fishing vacation.