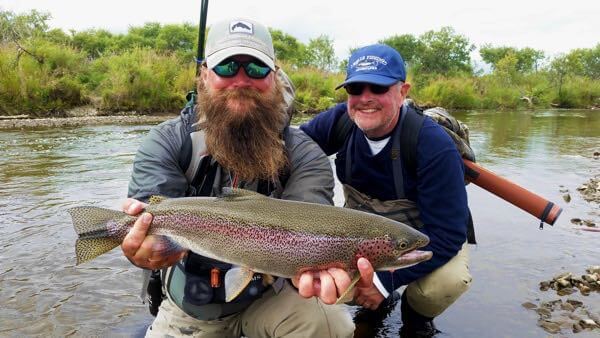 Bristol Bay is tucked between the Alaska Peninsula and the most eastern part of the Bering Sea. There are several rivers that flow into the bay that receive populous runs of all five species of salmon: Sockeye (red), Chum, Silver (Coho), King (Chinook) and Pink salmon. The abundance of fish in these waters make Bristol Bay an ideal destination for your Alaska salmon fishing vacation.

The most plentiful salmon species in Bristol Bay is Sockeye salmon. In fact, this salmon fishery holds approximately 46 per cent of the world’s wild Sockeye salmon. According to the United States Environmental Protection Agency, the annual average inshore run of Sockeye in this region was approximately 37.5 million fish between 1990 and 2010. Half of this salmon fishery is from the Nushagak River and Kvichak River watersheds. Both of these rivers are accessible through Alaska fishing lodges.

All five species of salmon can be found on a salt water fishing charter, but most Alaska fishing resorts offer fly fishing opportunities. Your fishing guide can take you to the most productive fishing grounds, depending on the season of your fishing vacation.

If you want to land a trophy King salmon, visit from mid-June to mid-July. Chum salmon arrive earlier in June and can be caught through July. This is the best time to fish for Sockeye and Pink salmon as well. Silver salmon arrives a little later in July, but can be caught well into the fall.

The legendary rivers of Bristol Bay also offer rainbow trout, arctic char, grayling and Dolly Varden, though some Alaska fly fishing lodges practice catch and release for these species. It is best to ask about this when you book your Alaska fishing vacation. Salmon, on the other hand, can be caught up to your legal limits, processed, packed and shipped home at your request.

A Natural Treasure to Preserve 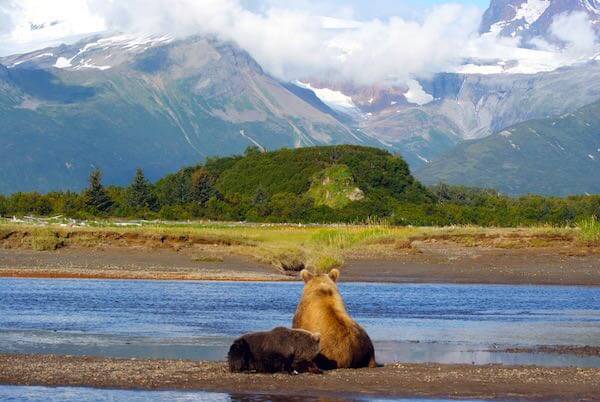 Vibrant blue inlets, fish-rich rivers and thick green forests lie before a dramatic, mountainous backdrop. The scenery at Bristol Bay will take your breath away.

Preserving this remarkable wilderness is an important part of the culture here. Bristol Bay is home to Wood-Tikchik State Park, the largest and most remote state park in the United States. The purpose of this 1.6-million-acre park is to protect the area’s fish and wildlife breeding and support systems. Doing this helps preserve the continued use of the area for recreational activities, like sustainable Alaska salmon fishing.

Wood-Tikchik State Park has over 12 lakes that take up over 1,000 acres, rivers up to 60 miles long and mountains reaching over 5,000 feet above sea level. Wood-Tikchik offers some of the finest sport fishing in Alaska among other outdoor activities including canoeing, kayaking, hiking and snowmobiling in the winter.

Katmai National Park and Preserve is also located in the area. This park is named after Mount Katmai, a volcano located in the park’s centre, and was established to protect this volcanically devastated region. Katmai National Park and Preserve is home to 18 volcanos, seven of which have been active since 1900, and the famous Valley of Ten Thousand Smokes. The park also protects important habitat for salmon and thousands of Alaska brown bears.

Alaska’s Bearclaw Lodge is in Bristol Bay and is a full-service, family-owned lodge in Alaska that offers the finest amenities for your trip. Despite being in the heart of the Alaska bush (with a spectacular backdrop of mountains), you can choose a main cabin or camp experience, and both are quite deluxe. The fishing goes without saying!

At the Alagnak Lodge you will enjoy an adventure that is all about you. This is a wilderness fishing lodge on tidal waters where the genetically pure salmon arrive on the incoming tides. We provide everything you need so you can make wonderful lifelong memories. Our mission is to deliver to you the wonderful experience you seek at a great value. You will have a lot of control over how you spend your days.

These multi-day wilderness float fishing trips are for the hard-core anglers (of all experience levels) who demand world-class freshwater fly fishing with extraordinary attention to detail and some of the finest guides in the business. Fish on remote rivers (Arolik, Kanektok, Goodnews, Togiak, Alagnak, Moraine and more) at the peak of the salmon runs or during times when availability is highest for native species like the rainbow trout. You’ll also have increased time on the water (after all you couldn’t be any closer to the fishing as you’ll camp right on the river at the best available fishing holes) and cover more water, where jet boats and airplanes simply cannot go.

In a remote location on The Nushagak River in Bristol Bay, Alaska. The Nushagak River is home to one of the the largest King Salmon runs anywhere in Alaska. River King Outfitters provides mind blowing, uncrowded, world class fishing on traditional tackle & on the fly.

Jake’s Nushagak Salmon Camp is all about the fish. Not only are they right on the world-famous Nushagak river, but their whole operation revolves around catching huge numbers of huge King and Silver salmon. Comfortable tents, hearty meals, and that’s about it…except for very knowledgable guides and and an “it’s YOUR trip” philosophy. With 19 hours of daylight in the summer, you really won’t find any place where you can catch more.

Only open for a few weeks during the prime time of the bountiful Salmon runs, this fishing camp is all about the fish. Lots of strong, energetic king, chum and sockeye salmon in almost unimaginable numbers.

Angler’s Alibi is a “high-end” remote fishing camp that doesn’t feel like a typical rustic fishing camp. Tents that feel like a building (carpeted wood floors!), electric perimeter fence and fantastic food prepared by world-class chef. We especially like the low 2:1 guest-to-guide ratio. Their location on the tidewater section of the Alagnak River means great fishing right off the shoreline and the dock. With all this, extremely reasonable prices mean high value, and that’s why we awarded it our Editor’s Choice.

Situated on one of the most iconic sections of the Alagnak river known as the “Upper Braids”, Alaska Trophy Adventures Lodge is another really remote lodge that provides a whole lot of luxury, and great prices translating into considerable value. The property consists of 160 acres of prime river frontage, so it’s guaranteed to be uncrowded. They are only accessible via bush plane, and have their own landing strip.