British Columbia’s southern interior regions offer hundreds of spectacular world-class lakes and rivers. The climate is very tolerable year round, so fishing can be enjoyed in all four seasons. Beside salmon fishing in summer and fall, anglers have many opportunities to target steelhead, coastal cutthroat trout, bull trout and Dolly Varden. These same species are also available for fishing in late fall and early spring further north, where the climate is more seasonal.

The southern interior region is often referred to as the “Yellowstone North” of fly fishing. This comparison refers to the abundant trout fishing opportunities scattered across this vast landscape, with a plethora of lakes that are home to some very large rainbow trout among others. 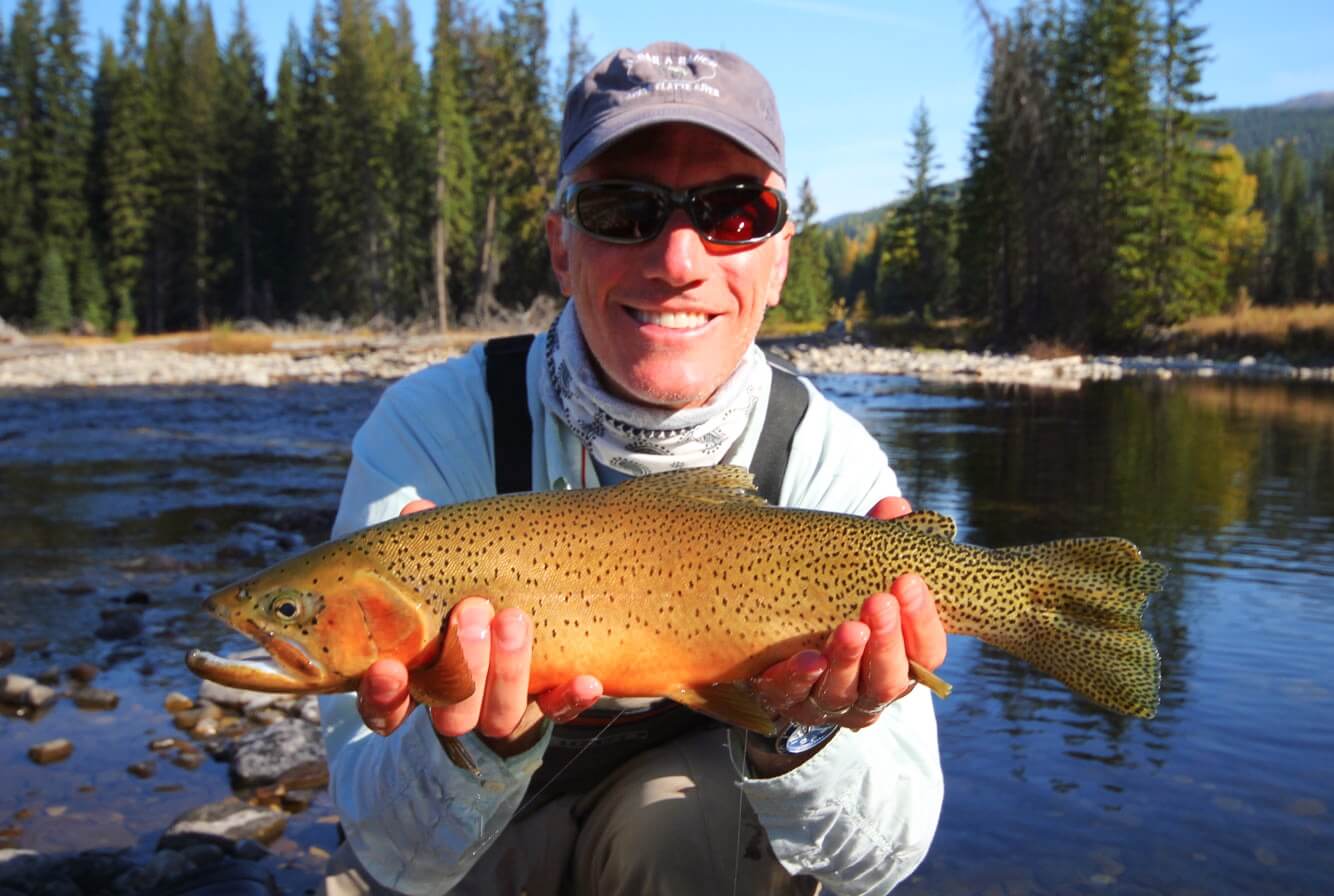 Regardless of the type of lake you fish, time of year and elevation often dictate what lures or flies will work best. This is because lakes undergo seasonal changes in temperature and water chemistry that affect where trout live in the lake and whether they will be actively feeding.

Much of the region is in the rainshadow of the Coast Mountains in B.C. and the Cascade Mountains in Washington. It’s warm and dry in the summer and can get very cold in the winter, but only the mountains and highlands get a lot of snow. Farther north, the centre of the province gets the benefit of having some rainfall from moist air off the Pacific Ocean. It has snowy winters and a very different group of animals and plants than on the coast. The winters are cold and the summers are warm and dry.

There are many small lakes and wetlands. Trembling aspen, Ponderosa pine, Douglas fir and lodgepole pine forests cover much of the land, providing homes for several rare types of bats and other mammals. In other parts, rocky hills, cliffs and even a desert are home to species only found in this region.

The region is home to the Tsilhqot’in, Dakelhne, Wet’suwet’en, Secwepemc, Nuxalk, Haisla, Okanagan, Nlaka’pamux, Secwepemc, and Kalispell First Nations. A proposed pipeline carrying diluted bitumen from Alberta would run through the Southern Interior, disturbing fragile grassland ecosytems and endangering the waterways of the region.

Another popular fishery that attracts anglers from around the world to British Columbia is Fraser River’s white sturgeon. Although the number and size of fish are significantly smaller than what it once was over 100 years ago due to overfishing, this catch and release fishery is now rebuilding the population while allowing anglers to catch one of these prehistoric giants.

Southern British Columbia includes four distinct regions all with their own unique geography and flavour. 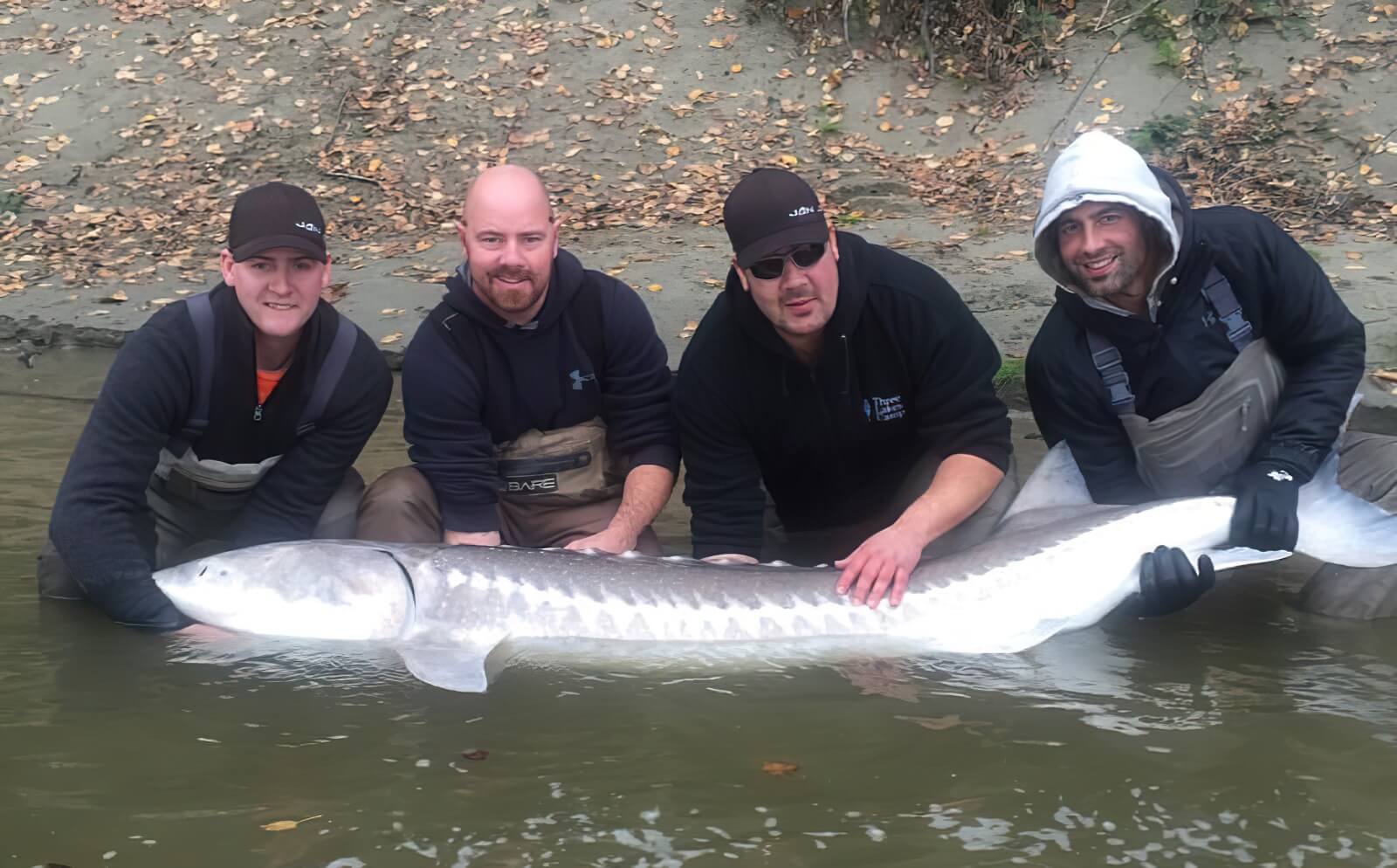 The Fraser Valley on the Mainland in the Southwest corner of the province has rich agricultural land that produces amazing fruit and vegetables. Through this valley runs the Fraser River – British Columbia’s longest river, running from Blackrock mountain through to the urban setting of Vancouver.

Only 60 minutes east of Vancouver near Chilliwack, you can find the last truly wild population of white sturgeon in the world – North America’s largest freshwater fish. These prehistoric giants can exceed 12 feet (three meters) long, weigh more than 1,500 pounds, and they can live for close to 200 years. The main sturgeon season on the Fraser River is from April to November. In addition to the sturgeon – steelhead trout, and and all five species of Pacific salmon are found in these waters. In fact the Fraser River is the best salmon river in the world.

The powerful Chilliwack River, also known as the Vedder, is one of the most popular rivers in the Lower Mainland. Trout are plentiful in the summer, and Chinook salmon start migration up the stream in June. September brings the coho salmon run, peaking in October. In the winter from December to May you can find Steelhead, that require patience and the most thrill of any fishing in BC. 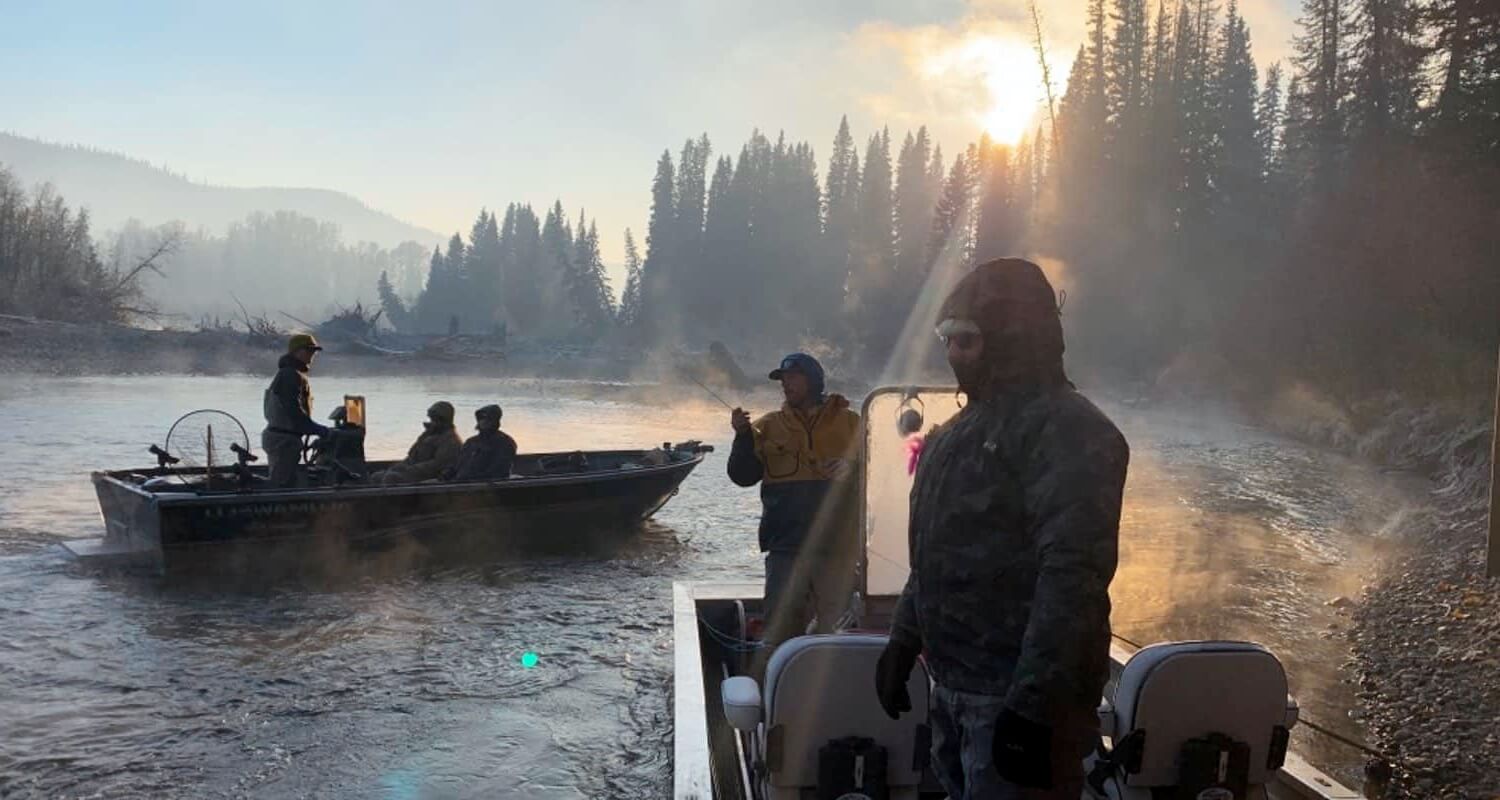 Acrobatic Kamloops trout, huge sea-run steelhead, the famous Thompson River and hundreds of stocked lakes in a dry, desert-like climate. No wonder thousands of anglers return year after year to this region.

The action starts on most lakes in April. Six-mile and Jacko lakes near Kamloops and White Lake near Salmon Arm are among the first to open. The Nehalliston wilderness lakes on the Bonaparte Plateau stay productive all summer. High elevation lakes like Dairy, Taweel and world famous Lac Le Jeune promise great fishing. Brook trout, lake trout and bull trout, Dolly Varden, small and largemouth bass, crappie and yellow perch are all available. 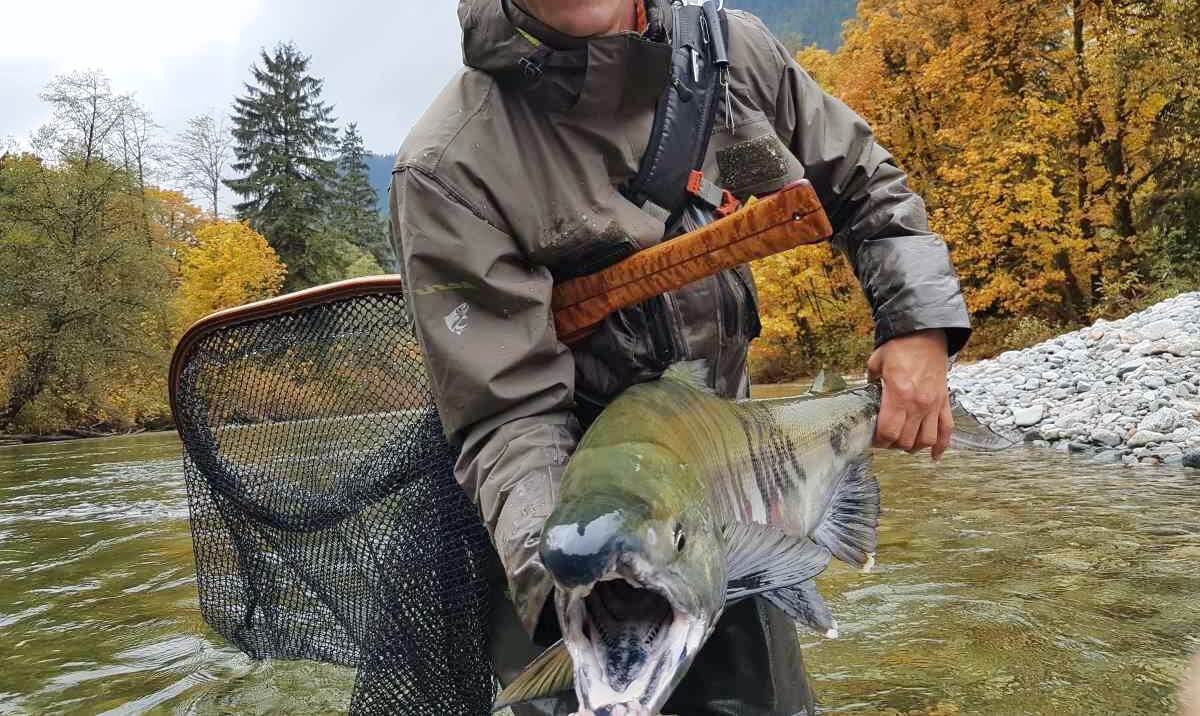 The Thompson-Nicola-Okanagan area is only about three hours from Vancouver, and very popular with anglers from around the world. A network of roads, many used by the forest industry, make much of the area easily accessible by car. Other, more remote areas are reached by hiking trail, 4WD or aircraft. Huge lakes like Kamloops, Shuswap, Adams, Murtle, Mahood and Clearwater provide excellent angling opportunities. They are more suited to trolling, but fly-casting near river mouths is also effective.

The Thompson River and it’s watershed are home to many types of Pacific salmon and trout. The headwaters start near Well Gray Park in the north and flows south through forested hillsides to the grassy lowlands of the Thompson Plateau.

Almost 50 percent of the province’s freshwater sport fishing occurs in the region that includes the Thompson and Nicola Rivers. These rivers are tributaries of the Fraser River with spawning salmon. The smaller tributary streams are teeming with rainbow trout, Dolly Varden and Kokanee. Higher elevation lakes support rainbow trout and brook trout fishing, Dolly Varden and small and largemouth bass. This truly is an angler’s paradise.

River fishing in Thompson-Nicola usually runs from July until late fall. In late summer and early fall, salmon return to the Thompson River and other Shuswap tributaries to spawn, and while good, it’s the trout fishing that can be sensational during this time of the year.

Near Merritt, the abundant lower-altitude lakes in the Nicola Valley provide an opportunity for spring trout in the shallow lakes that are surrounded by rolling grasslands, with fishing starting in April.

In the summer months, the Nicola Valley area is hot and dry—an ideal destination not only for fishing but for hiking among the hills and mountain meadows. Take in the history of early western lifestyle and historic ranches, mining and railways.

Just to the east, and near the US border lies the arid Osoyoos and Oliver regions with hoodoos, western rattlesnakes and prickly pear cactus in the desertlike environment. Here and along into the Okanagan valley is where the award winning Canadian wine is made from Okanagan grapes. Vineyards, wineries and orchards are around every corner of this area, and are definitely worth a visit while in the area. 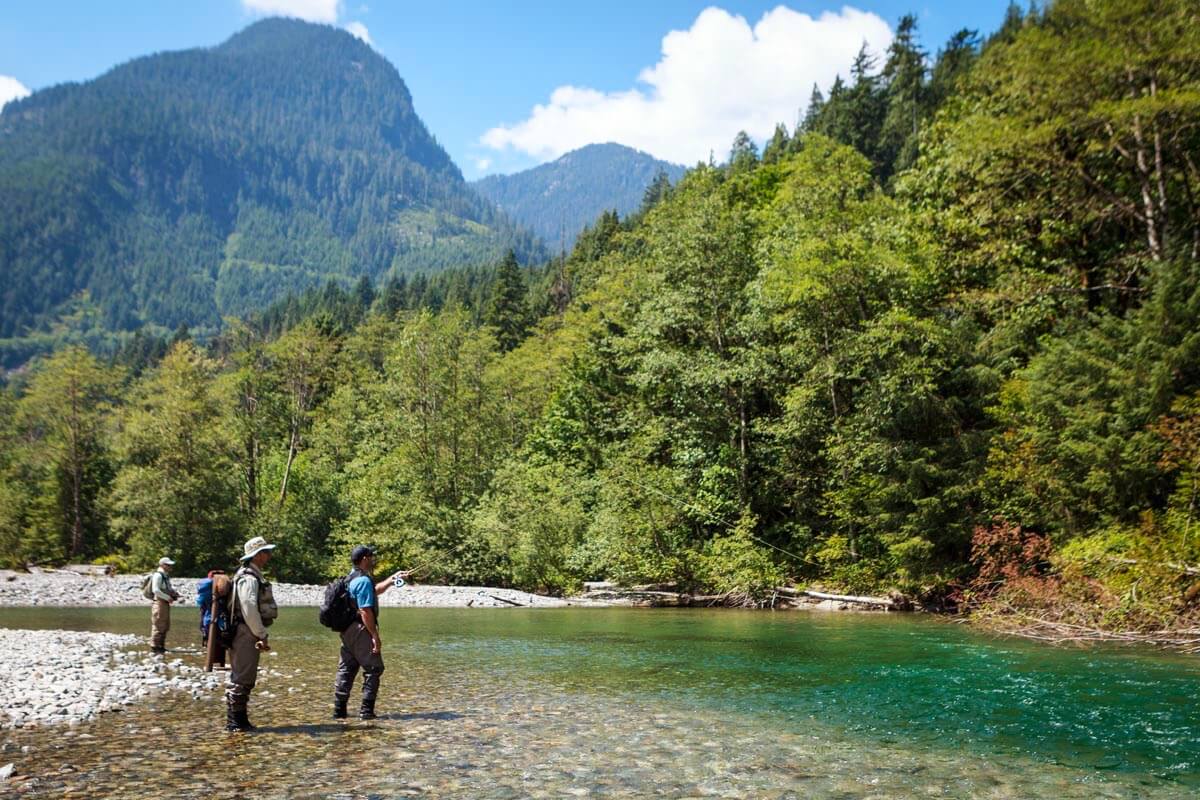 The Kootenays region of British Columbia is dominated by mountains including two of the major wilderness parks: Valhalla Provincial park and and Kootenay National Park. The glaciers high in these Rocky Mountains feed hundred of lakes. 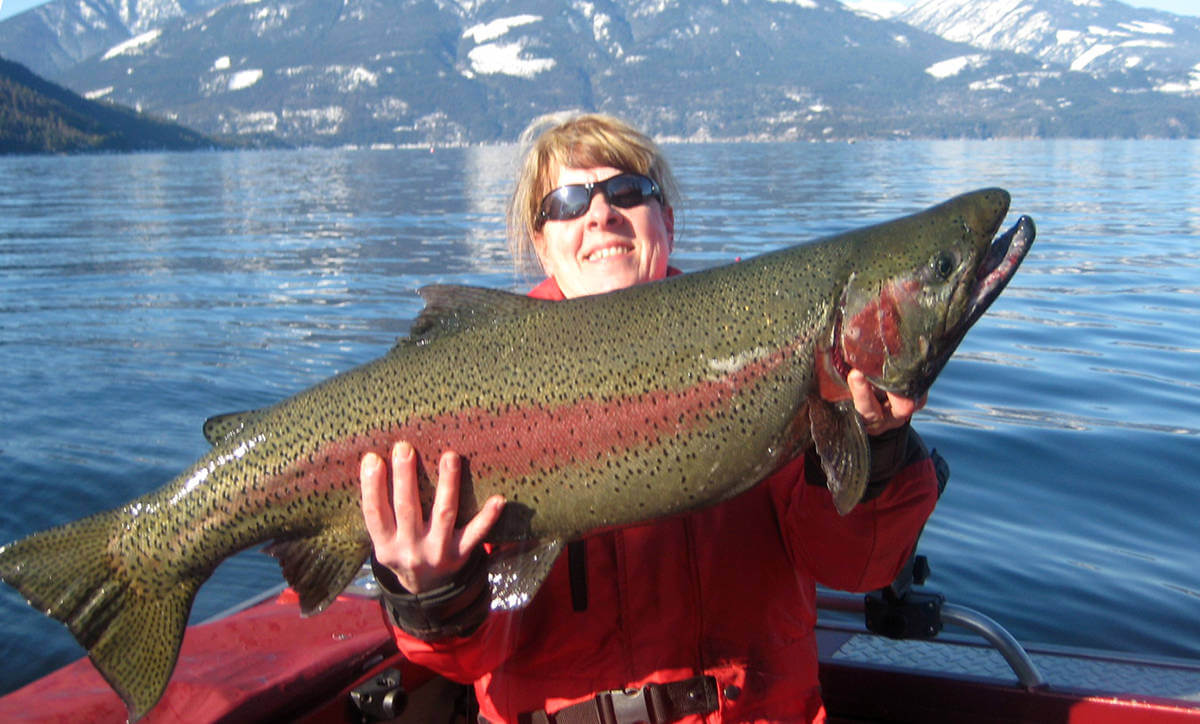 The Columbia River starts in the Kootenay rocky mountains and flows through Golden and Revelstoke, then south into Washington. Fly-fishing for trout is popular here, with Rainbow Trout native to this fast-flowing Columbia river. If it’s a trophy fish you are after then Bull Trout (aka Dolly Varden) is a worthwhile—and not easy—pursuit.

The largest rainbow trout in the world—Gerrards—are native to West Kootenay, and it’s still possible to catch one up to 20lbs on the Arrow and Kootenay Lakes, with the best time to catch them is in the fall.

Flowing through Fernie, is the Elk River offering some of the best fly-fishing in North America for cutthroat trout which are plentiful from June until the end of October. Bull trout are also found in this river, and can be very aggressive trying to steal a hooked up cutthroat.

TROUT FISHING IN THE CARIBOO 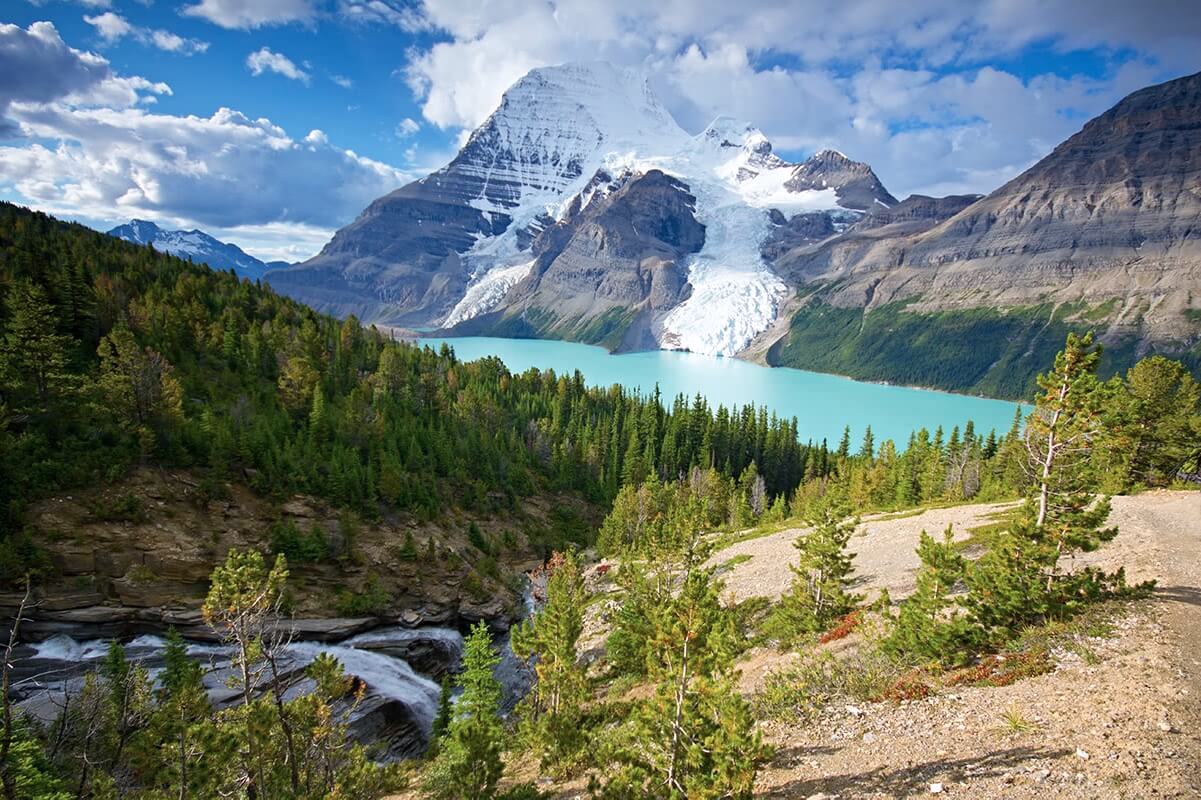 Trout fishing is British Columbia’s best kept secret. Most people think of salmon fishing when they think of fishing in BC, but trout fishing in the Cariboo on pristine and quiet lakes is world-class.

The diverse geography of the Cariboo in the heart of British Columbia includes mountain ranges, dense forests, arid deserts and countless lakes and rivers. The area is largely undeveloped, with few people and lots of wildlife. The climate is hot and dry during the summer. 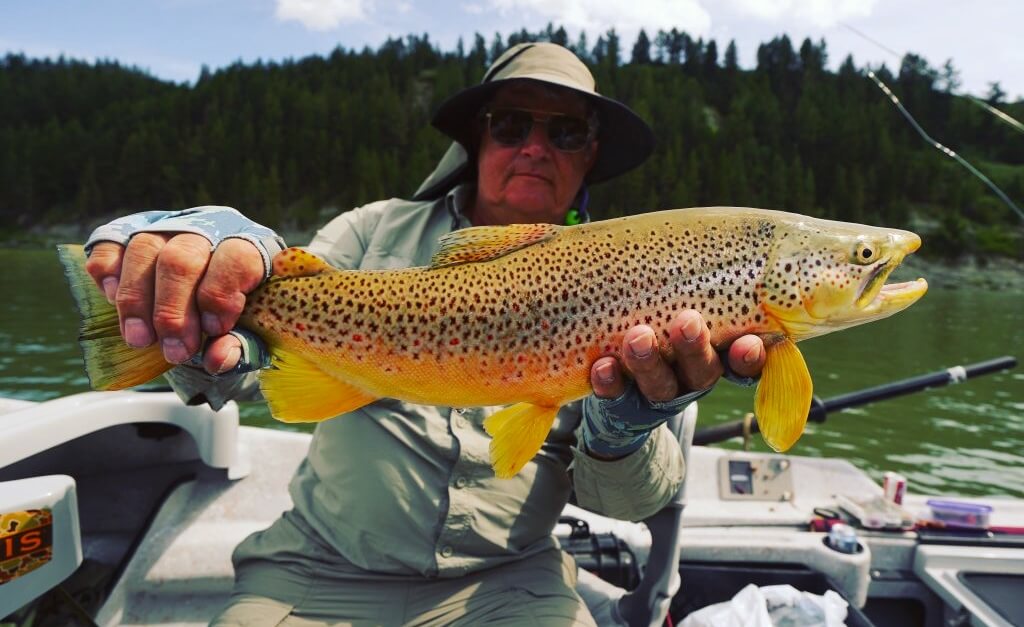 Some of BC’s best freshwater sport fishing is found in this region, and the fishing for wild rainbow trout is incredible. Rainbow trout are native to BC, and in addition lakes are continually, and abundantly stocked. The nutrient-rich waters allow the trout to grow quickly, and produce acrobatic and hard-fighting fish.

Rainbow trout, bull trout and Kokanee are the most common fish found near Williams Lake, with many fishing lodge options on Puntzi Lake. Join in the fun during the annual fishing derby during the month of July. Just south, near 100 Mile House is the area known as ‘The Land of the Lakes’. Both areas offer peace and quiet, stunning scenery and incredible fishing. In fact the Highway that runs from just south of 100 Mile House to Little Fort is known as ‘The Fishing Highway’, with easy access to over a hundred lakes within an hour’s drive.

No lodges in the region have made our list yet.