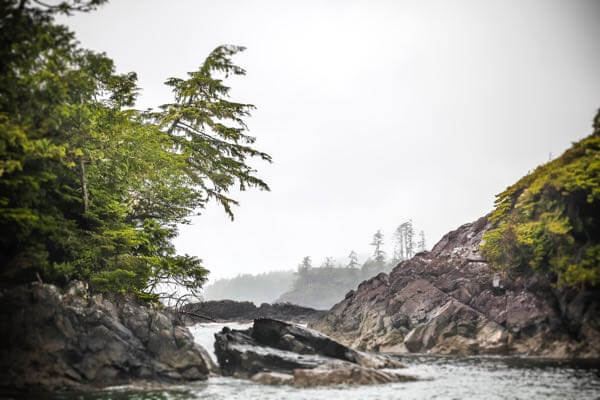 Southeast Alaska (also known as “the Panhandle” or “the Inside Passage”) is a long, narrow coastal strip of land stretching nearly 500 miles from Ketchikan in the south to Yakutat in the north. It’s known for its fjords, mountains, maritime climate, old growth spruce and hemlock forests, glaciers, and of course, the fishing!

Southeast includes over 1,000 islands strung just offshore westward from the mainland. The Tongass National Forest, the icy Glacier Bay National Park and the Misty Fjords National Monument are just three of the federally designated areas that are found in this area of islands and rugged mountains. Most of the towns in Southeast Alaska can only be reached by plane or ferry.

Southeast Alaska’s vast, unspoiled landscape and natural beauty attracts visitors from all over the world, but it is the incredible fishing that brings anglers flocking for an unforgettable fishing vacation. Southeast Alaska fishing is world-renowned, and sport anglers can stay busy year-round fishing for wild trout, steelhead, all five species of Pacific salmon, halibut, lingcod, rockfish and a variety of other species. Opportunities for both freshwater and saltwater shoreline fishing for salmon exist near most towns and cities.

Salmon fishing around Ketchikan is second to none, and Ketchikan is known as the “salmon capitol of the world”. The Spring Chinook (King) salmon start showing up in May followed by the summer Coho (Silver), Chum, Pinks and then a fall run of Coho, providing about 4-1/2 months of solid salmon fishing. 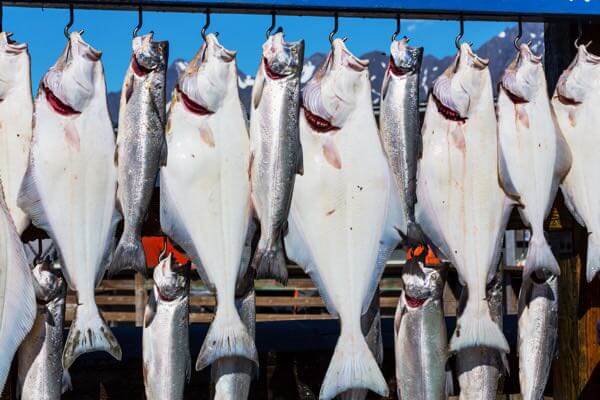 Halibut is especially abundant in Southeast Alaska. Large tides, mass bait fish and huge schools of migrating salmon and cod provide an abundance of food for the giant flat fish to feed on. The inside passages and islands offer calm waters in which to target halibut. While halibut fishing, it is not uncommon to also catch rockfish, pacific cod, ling cod, and other various species.

Unlike neighbouring regions to the north, Southeast Alaska has few large rivers. Instead it has hundreds and hundreds of small, clear streams. With significant amounts of rainfall, nearly every valley has a creek that drains it. Many of them rarely get fished as the sheer number of streams spreads out the anglers.

Most rivers are short, 5 to 10 km (3 to 6 miles) long, and are host to migrations of native trout, char, and salmon. A typical creek starts off in a heavily wooded forest and has fast currents interspersed with pools and undercut banks. As the creek nears its saltwater terminus the gradient flattens, slowing the current and deepening the creek as it winds through a meadow. At the end of the stream is the intertidal zone where the creek depth varies dramatically between high and low tide. As the tide moves in the salmon and trout move in with it. This often provides great fishing for bright salmon and hungry trout.

Freshwater fishing trips feature steelhead in the spring, rainbow and cutthroat trout throughout the summer, Sockeye salmon in late June and early July, Pink salmon in mid to late July and Coho (Silver) salmon in late August through late September.

Elfin Cove Resort is perfect for a larger group, with a recently renovated lodge nestled in be beautifully lush surroundings. The boats are big (30′ to 36′) and comfortable, with no more than 4 guests per boat, giving you lots of space. Captain Mike is also very experienced, and his team all provide exceptional service.

Naukati Bay Adventures is small but perfect for a larger group where you could have the whole place to yourself with a fairly high-end, 4-bedroom, 3 bath private lodge for your group. The service you’ll get is impeccable. The owners put a focus on a level of personalized service that you won’t find elsewhere in the Southeast. Fishing close to the reefs and kelp beds allows fishing shallow and with light tackle, bringing the fish fighting experience to the next level.

Luxurious accommodations, brand new 24ft boats and a 5-star (avg!) rating from dozens of past guests…Fireweed Lodge is a hidden gem located on the west coast of Prince of Wales Island. It’s so easy to recommend because we can’t be more certain that you’ll find it a fantastic value and that you’ll absolutely enjoy your fishing vacation here.

Island Point Lodge is unique in that they focus on unguided fishing only—this saves you a lot of money if you don’t need (or want to pay for) a guide. Boats are provided for as long as you want, and given the prime location where there’s really no unproductive spot, we’d have to say that as long as you know what you’re doing, this is the place you’re going to haul in the most fish (yet feel totally relaxed a the end of the week since you can take your time and fish when you want).

Glacier Bay Eagles Nest Lodge is one of the best lodges on the site to go if you are serious about catching massive halibut. It’s just outside Gustavus, Alaska, which is known for having the world’s best halibut fishing. Giant halibut over 400 pounds have been caught, and halibut from 100-300 pounds are caught on a regular basis. Their boats average a 100lbs.+ fish per boat per day. If you want to catch all five species of salmon and/or gigantic halibut, this is the place for you.

Yes Bay Lodge is the place to take your family. It’s a family-run operation, and the owners are some of the nicest, most caring people you’ll ever meet. The dining is fantastic, the accommodations top-notch, and the fishing is as plentiful as any other location in the Southeast (with very comfortable boats, too!).

Bright and spacious oceanfront guest rooms featuring private balconies overlooking the famous Mt. Edgecumbe volcano. Fantastic meals, a cozy bar and sauna round out the five-star accommodations. High-end, 30-foot walkaround boats and top quality gear. Friendly, experienced guides round out the offering. Add to that super-easy access from Sitka. This is not a remote fishing vacation, but if you don’t mind a more “urban” feel to your trip, there is excellent value here.

Green Rocks Lodge is one of few options for unguided fishing in Southeast Alaska. They’re in a terminal fishery, which means their bag limit is 2 King salmon over 28 inches and 2 halibut (no size restriction) per day. They fish in protected, shallow waters (40-90 ft.) and their prices are quite reasonable. Overall, if your primary goal is to take home a lot of fish and don’t require a guide, there’s great value here.