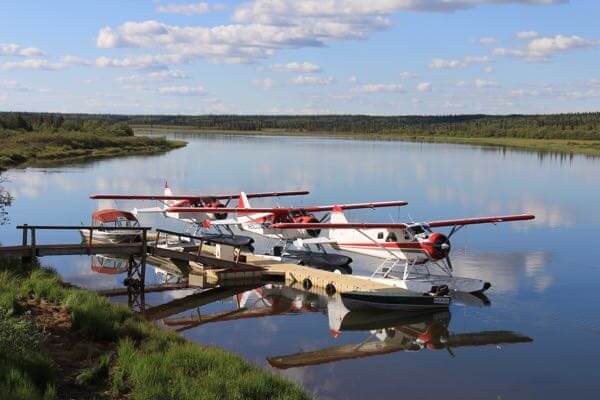 If it’s a remote Alaska fishing vacation you’re after, you’ll find yourself far from the crowds and close to nature in Alaska’s interior. This region makes up for nearly 80 per cent of Alaska and is home to the state’s largest river systems. Surrounded by wildland, these rivers, along with a network of streams and lakes, are teeming with many species of fish including Dolly Varden, northern pike, burbot, sheefish, arctic char, arctic grayling, rainbow trout and all five species of Pacific salmon.

Though some freshwater fishing is accessible along the region’s road system, the most remote and productive fishing spots can only be accessed through a fly-in fishing lodge. Your interior Alaska fishing guide will take you along rivers and to lakes that offer landlocked salmon and a wide range of other sought after game fish.

Though summer might be short in this part of the world, the days are endless and the fishing is non-stop. Pacific salmon enter the waterways in early June and make their way up the rivers and streams with the best King (Chinook) salmon fishing being in June and July. Fish in August and September for Silver (Coho) salmon. The Yukon river system has a populous run of Chum salmon all summer and into the fall. 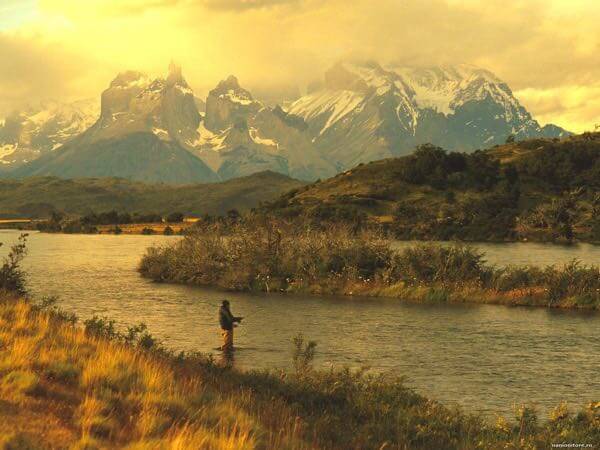 Fish for sheefish in mid to late summer. Interior Alaska is known for its large sheefish and they are often called “The Tarpon of the North”. The average sheefish weighs 5 to 20 pounds, but anglers have hauled in sheefish weighing 60 pounds or more in some areas. You’ll enjoy catching these beauties on your Alaska fly-fishing vacation.

There are ice fishing opportunities here in the winter months. Anglers who brave the weather can enjoy great burbot fishing on frozen rivers and lakes. You will also see little villages of ice fishing huts going for trout and land-locked salmon in the winter.

While you’re fishing, expect to be treated to some spectacular wildlife viewing too. From your Alaska fishing resort or while on the river, you might see moose, black bear, grizzly bear, caribou, eagles and a variety of bird life.

Alaska’s interior region is home of Mount McKinley, which was formally named “Denali” recently. Denali is the tallest mountain in North America with a summit elevation of 20,310 feet (6,190 metres) above sea level. This impressive peak is considered the third most isolated and third most prominent peak after Mount Everest in Nepal and Aconcagua in Argentina.

You can check out this massive mountain while visiting Denali National Park and Preserve. The park encompasses more than 6 million acres and offers a variety of outdoor activities including hiking, cycling, mountaineering, wildlife viewing, dog sledding, cross country skiing and fishing.

Very comfortable, private cabins surrounding a lodge built by the owners. One owner is a professional chef, and the high-end meals reflect this. Very highly rated, and an outstanding location for salmon, grayling and trout fishing make this an exceptional, all-inclusive value.

McDougall Lodge is located on a mile long slough, where the Lake Creek waters runs into and meets the glacier waters of the Yentna River in front of the lodge. Thousands of all 5 species of Salmon come into the clean Lake Creek waters directly in front of the lodge to clean their gills. This is one of the best salmon fisheries in Alaska, though there’s also plentiful graylings and rainbow trout. Vacations are all-inclusive with flights from Anchorage included.

This is pretty much a quintessential fishing lodge, a very remote lodge in the heart of Alaska bush country on the Holitna River. The lodge has hosted fishing trips for such notable figures as George Bush Sr., Chuck Yeager and Dave Dravecky. The Holitna river system is said to contains more species of fishthan almost any other system in Alaska (and Alaskan Adventures holds five world line records for Northern Pike & Sheefish).

This small (8 guests max.) family-run fly-in lodge in the Alaskan interior is distinguished from other Alaska lodges by the remote, untouched river systems they can that fish. They’re the only lodge in Alaska that owns two helicopters for exclusive use by their guests. Located 80 miles west of Anchorage, surrounded by nothing but a valley of mountains, they fish streams rarely seen by other anglers.

Wilderness Place Lodge prides itself in offering the highest level of customer service and hospitality. Their river is a postcard-perfect, clear-water tributary offering fantastic fishing for all salmon species, rainbow trout and arctic grayling. Their modern cabins provide the utmost comfort, and the meals are top-notch. Overall, excellent value here.

Alaska’s Anvik River Lodge claims to be “Alaska’s most remote lodge”, and while we can’t be certain of that, it is pretty darn remote, and the only fishing lodge on all 120 miles of Anvik River. It will be just you, the other guests and lots of wildlife (grizzlies, moose, wolves, otters, beavers, eagles, osprey, and of course a whole lot of fish!) It feels like your own private fishing reserve! Add to this a very comfortable lodge, and the fact that absolutely everything’s included (even an open bar and the flight from Anchorage) and you have an ideal fishing vacation.