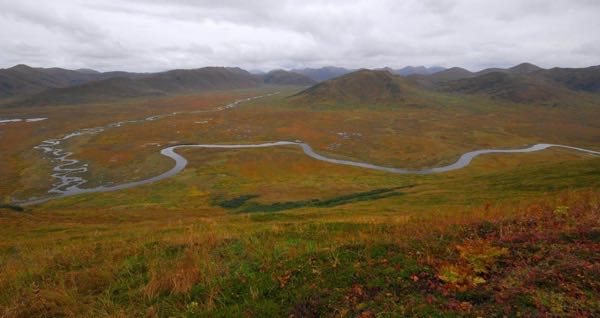 If you’re looking for a remote fishing destination that is out of the ordinary, Kodiak Island is an exceptional choice for your next Alaska fishing vacation. The only way to get to Kodiak Island is by plane or boat and the public road system on the island is minimal. Alaska fly-in fishing lodges, float trip guides and remote fishing charters can take you to isolated angling grounds that offer access to both fresh and salt water fishing. You’ll enjoy the lack of crowds, dramatic landscapes and some of the best salmon and halibut fishing in the world.

Kodiak Island is located off the south coast of Alaska, separated from the mainland by the Shelikof Strait. It is the largest island in the Kodiak Archipelago, a group of islands located 30 miles offshore from the Alaska Peninsula. Kodiak Island is the second biggest island in the United States and boasts Alaska’s wilderness in it’s purest form, showcasing lush forests, emerald hills, snowy mountains and deep blue seas. Take in this breathtaking scenery has you fish along the coastline, or on one of the island’s rivers and lakes, during your unforgettable Alaska fishing vacation. 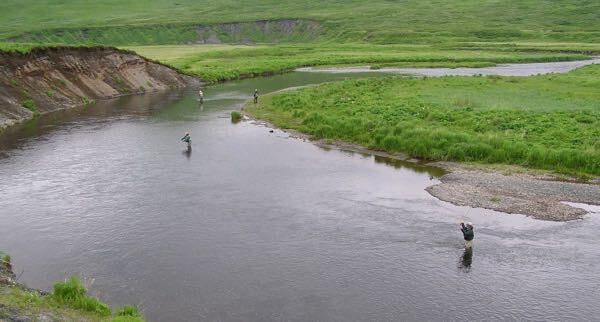 Freshwater streams and lakes can be accessed along the road system on Kodiak Island, Alaska. Fishing resorts also offer access to freshwater fishing and fly fishing opportunities in more remote areas. Most Kodiak rivers support populations of trout and a variety of salmon species. The best area to fish on a river is in the inter-tidal zone closer to the coast where the river’s depth varies depending on low or high tide. As the tide comes in, you’ll find a fury of hungry salmon and trout.

Fish for Rainbow trout and Dolly Varden in Kodiak Island’s fresh water systems in early spring. This is when they come out to feed on minnows and salmon fry. You can also find populations of Dolly Varden in the inter-tidal zone of streams during a salmon run later in the season. Steelhead can also be found in the spring, but are primarily a fall-run fish.

As summer starts, so does the return of Red (Sockeye) salmon! Kodiak Island is home to several red (sockeye) salmon runs, making your Alaska fly-fishing vacation a very productive one. King (Chinook) salmon have been found in fresh waterways this time of year too, but mostly in remote locations that would require a fly-in fishing charter. Two of the most famous rivers for Alaska fly-in fishing are the Karluk and Ayakulik Rivers. Surrounded by untouched wilderness, these wide open rivers are a fly-fishing angler’s dream.

In August, Pink salmon begin their spawning runs and can be found in almost every water way on Kodiak Island. Book your trip at an Alaska fishing lodge during August and you’ll have your work cut out for you hauling in Pink after Pink! This is also a good time for beginner fly anglers to try the sport as these fish are hungry and easy to hook. You can also find Silver (Coho) salmon near the end of August but they’re much bigger and easier to catch in October after the Pink runs die down. The fall is also the best time to fish for Steelhead and Rainbow trout.

Kodiak Island has many deep inlets that are well-protected from the open ocean and home to both bait fish and salmon spawning runs. If the salmon are not on a spawning run themselves in these areas, then they have arrived to feed on the bait fish. Though the timing of these runs vary on different areas of the island, anglers can fish for King (Chinook) salmon as well as Silver (Coho), Pink, Sockeye (Red) and Chum salmon generally anywhere along the coastline. 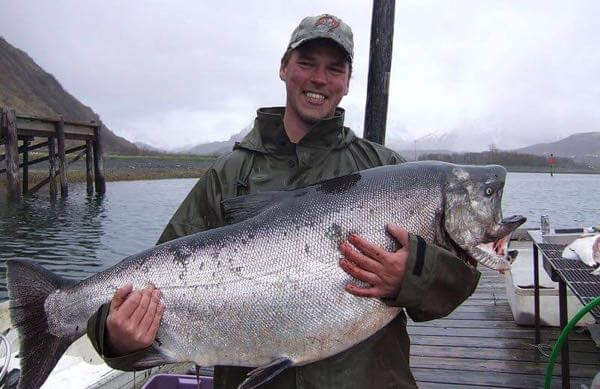 King salmon are the trophy fish of choice with record catches weighing 50 to 90 pounds! You can land King salmon any time of the year, but the biggest can be caught in May through August when they come into the region to feed.

In July and into late August you can take advantage of the high concentration of silver (coho) salmon, especially if there are spawning baitfish in the area. Catch red (sockeye) salmon runs from mid-May through mid-August. Silver (coho) arrive in numbers in mid-August and can be caught into September. You’ll find Pink and Chum salmon around the island’s coast in July and entering the interior waterways in early August.

Try your luck at the Annual Kodiak King Salmon Derby that runs April through May, with special derby competitions happening outside of the City of Kodiak in May and again in July. Not only does this derby offer anglers a chance to compete for impressive prizes as they try to reel in the largest King salmon, it is also an opportunity to support the region’s salmon fishery. Proceeds from the Kodiak King Salmon Derby are donated to a local salmon enhancement project conducted by the Kodiak Regional Aquaculture Association and the Alaska Department of Fish and Game. 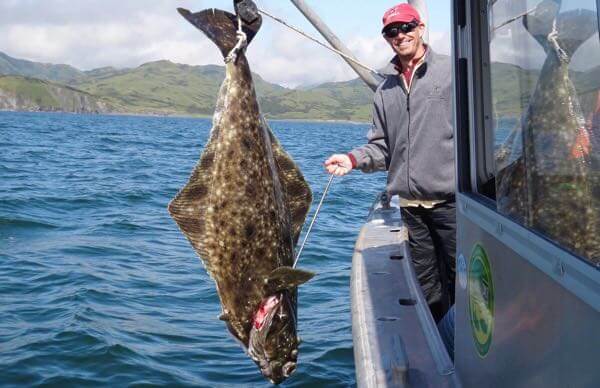 Alaska halibut fishing vacations are rewarding in the Kodiak Island region. Record weights for halibut caught by sportfishing anglers is up to a colossal 400 pounds, though sizeable halibut weighing around the 100-pound mark are more frequently caught. You can go for these “barn-door” sized halibut any time of year, but you’ll get the best activity and perhaps bigger fish in July and August. Since salmon runs are also populous during this time, you can make the most of your Alaska fishing holiday and go for both! Your saltwater fishing trip will also produce ling cod and a variety of rockfish. 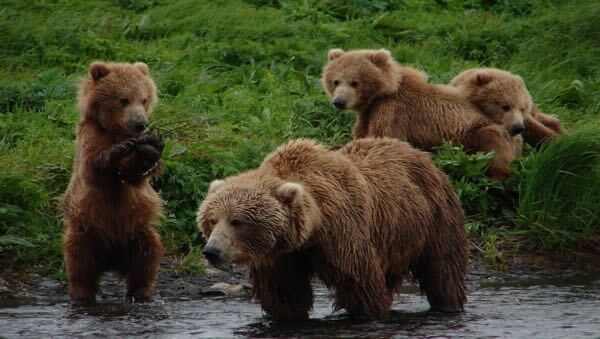 Two-thirds of the island is made up of the Kodiak National Wildlife Refuge. This protected area also spans onto other islands that are a part of the Kodiak Archipelago. Not only does the refuge contain protected rivers and streams for all five species of Pacific Salmon and other species of fish, they are also the nesting ground for 250 species of birds. You will also find mammals like the native Kodiak brown bear, red fox and river otters along with deer, mountain goats, elk, reindeer and beaver.

This wilderness is absolute paradise for outdoor enthusiasts. Hiking, backpacking and biking will take adventurers through dense Sitka spruce forests, along mountain ridges and through meadows of alpine wild flowers. If it’s a water adventure you’re after, explore miles of coastline and protected bays in a kayak on a guided paddling tour. Or, if you prefer to see the island at a quicker pace, travel through the backcountry on an ATV excursion and discover areas of the island that are seldom visited.

Discover the wild on Kodiak Island, it’s stunning wilderness and all there is to see and do.

In addition to a more traditional lodge experience (but perhaps still incomparable, as it’s deluxe in every way despite being exceptionally remote), Fishhound Expeditions offers something fairly unique: multi-day, fly-in, float expeditions into wild Alaska.

Completely off the grid and rustic, Driftwood Wilderness Lodge offers an incredibly remote, yet all-inclusive experience without having to travel that far (Kodiak Island is relatively easy to get to). There’s a fantastic saltwater fishery, with catch limits greater than elsewhere in Alaska. Owner Nick Blanco built the lodge by hand himself, and his enthusiasm for the healing power of the wilderness is apparent, as is his knowledge of where to find abundant fish to fill your freezer. Extremely reasonably priced, and a fantastic value for what you get. Save an average of USD$99 per person when you book through fishlodges.com.

A&W Big Timber Lodge offers saltwater and freshwater fishing from their beautiful lodge nestled among 197 acres of old growth spruce on Raspberry Island, just north of Kodiak Island. The lodge’s close proximity to the fishing grounds (only about 5 mins) means more time spent fishing, and the location offers great adaptability to the ever changing Alaskan weather, so they can basically always find a spot that is fishable no matter the weather. Considering the 5-star average rating, this is one of the best Alaskan fishing lodge values around.

Kodiak Island Resort is a remote, world-class sportfishing lodge on the western side of Kodiak Island, adjacent to world famous Katmai National Park. Small groups (max 8 guests) allow them flexibility to facilitate each guest’s personal needs and requests. Outstanding fishing, magnificent scenery, abundant wildlife and four-star service, plus they pride themselves in treating guests like family. Save an average of USD$174.80 per person when you book through fishlodges.com.

Kodiak Wilderness Adventures features probably the most comfortable lodge on Kodiak Island, and all the amazing fishing that Kodiak Island is known for, including some truly gargantuan halibut. But their best feature may in fact be their custom-built 38′ sport fishing boat “Amy Lorese”. Given that you’ll be spending 80%+ of your fishing vacation on Kodiak Island on the water, this is something to definitely consider.